This Generation Will Not Change the World in the Future

On February 14, 2018, a student killed 17 people, 14 students and three teachers, at Marjory Stoneman Douglas High School in Parkland, Florida . He (I choose not to share the names of shooters in this or future blog posts) injured 16 more in a massacre that would cause conversations about gun control, mental illness, and anti-bullying to pop up all over the media once again. Political arguments over second amendment rights v. assault weapon bans have been the top story on every news media outlet. Blogs have been written, memes have been shared, and like every other shooting aftermath of conversations, this one will fade into the darkness until the next horrible tragedy occurs and we have the conversation all over again, right?

This time is different. . .

I argue that this time it is different. This generation, which span the end of millenials and the beginning of Generation Z (or whatever we are calling them these days) are not going to change the world in the future.

But wait? Look at Emma Gonzalez, a Parkland shooting survivor, who is writing words, speaking her message, and taking action by encouraging her generation of new voters to put their words into action by lobbying against the NRA and advocating for greater gun control to protect students and citizens in our country.

Students are organizing March for Our Lives rallies and protests throughout the country. They’re participating in peaceful walkouts at their schools supported by teachers and administrators.

How can I say that this generation will not change the world?

They won’t because they already are. 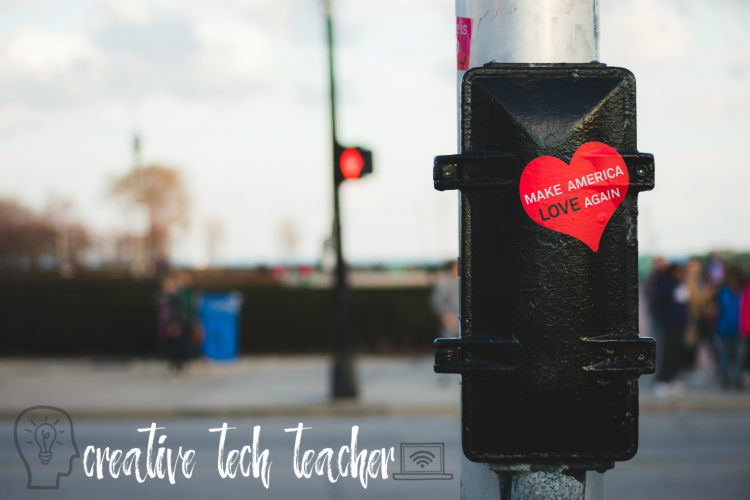 How young people are changing the world

Major corporations are taking notice of the movement being fueled by this generation. The #NeverAgain students from Parkland, including Gonzalez, are fighting for stricter gun control, and companies worth million of dollars are listenting.

Delta is reaching out to the NRA to let them know we will be ending their contract for discounted rates through our group travel program. We will be requesting that the NRA remove our information from their website.

Building on our 2015 decision to not sell modern sporting rifles, we announced important changes today:

It’s not just about gun control.

Bullying is a problem in our schools. It’s always been a problem. I spent my preteen years crying while mean girls made fun of my stringy hair, my flat chest, and my band geek status. Going to school with the same 40 kids for eight years was painful when a handful of them made it their mission to make others feel miserable. I survived, but I know how bad it hurt.

Today’s young people have social media and little devices in the palms of their hands to allow for instant rumors, hate, and words that can be hidden behind screens without immediate consequences of nasty words. Kids can be nasty in person, but when they can just type their horrible words online without seeing the face of the victim of their bullying, the perpetrators rarely realize the implications and impact of their words.

But for every bully, for every hateful word spoken, there are thousands of acts of kindness that go unnoticed. 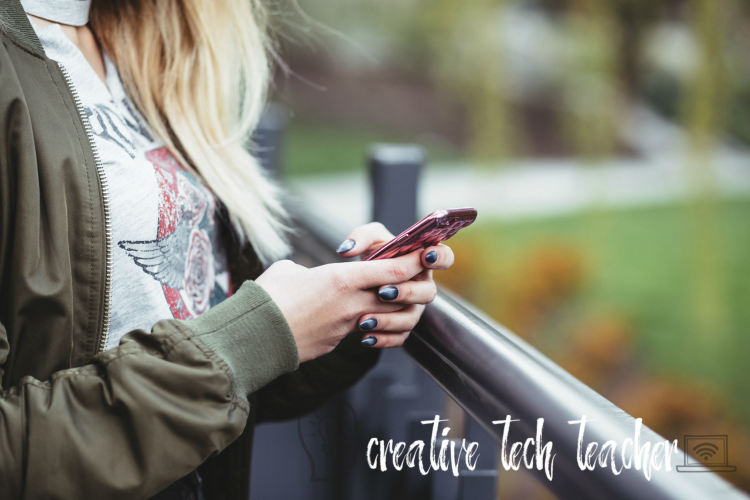 In 2005, I started teaching at a suburban middle school as an eighth grade English teacher. I will never forget that class partly because they were my first students, but I’ll also never forget their kindness. There were a group of boys. They were well-liked by their classmates, and I suppose they were considered “popular” if I was any judge as a twenty-something who was anything but cool in my middle grade years. I witnessed these boys day after day set a backpack on a seat at their lunchroom table. They told kids that they knew had other places to sit that the seat was taken until a young man who had a disability would walk near their table. Knowing that he struggled to make friends and have a place to fit in, they invited him to sit with them every day. This was before widespread social media movements calling for kids to be buddies at lunch to kids that ate alone. No one asked these students to do this. They did it on their own. They never mentioned it to an adult in the building, but we noticed. We noticed them being kind.

I’ve kept in touch with some of the students from my first class. They’re millennials who are making a difference in the world. They’re business professionals, doctoral students, parents, teachers, and just plain amazing human beings. They’re not waiting around to change the world by posting memes, they’re getting out there and doing something.

Dr. Ferial Pearson is a former high school teacher and professor in Omaha, Nebraska. She started the Secret Kindness Agents at Ralston High School with a group of students after the Sandy Hook Elementary School Shooting in 2012. Her “agents” performed anonymous acts of kindness. Eventually, their cover was blown, but they wrote an amazing book spreading their mission as a result.

I always tell my students and my own daughter, you don’t have to be friends with everyone, but you do have to be kind.

There are bullies in every generation, but I promise you that you if you look, this generation isn’t waiting to do something about bullying. They’re taking action with kindness, now.

It’s not just about bullying.

It’s about relationships.
It’s about ending the stigma that comes with mental illness.
It’s about acceptance of race, gender, and religion.

This generation is not just talking. They’re taking action. They’re voting with the rights of future generations in mind. They’re exercising their first amendment rights by speaking their mind and peacefully protesting. I commend them. We’ve got to stop shaming and stereotyping teens and young adults for the mistakes of a few. When a 64-year-old white man killed 58 people and injured 851 in Las Vegas in October 2017, no one blamed an entire generation of baby boomers. Let’s stop saying this generation is entitled, spoiled, or morally-corrupt. They’ve watched their friends or seen the bodies of people their age across their screens, and they’ve had enough.

This generation will not change the world in the future; they’re changing it now.

Share the way you or your students are changing the world on social media. Tell your story with #generationchange.

Tag our social media so we can share your stories. This generation is changing the world today. They are making a difference. They matter. Give them your support.

This is my promise. I will defend this generation and their ingenuity, kindness, and spirit. Generalizing preteens and teens as lazy, morally corrupt, and entitled is wrong. Stop judging kids as you tell kids to stop bullying and labeling each other. 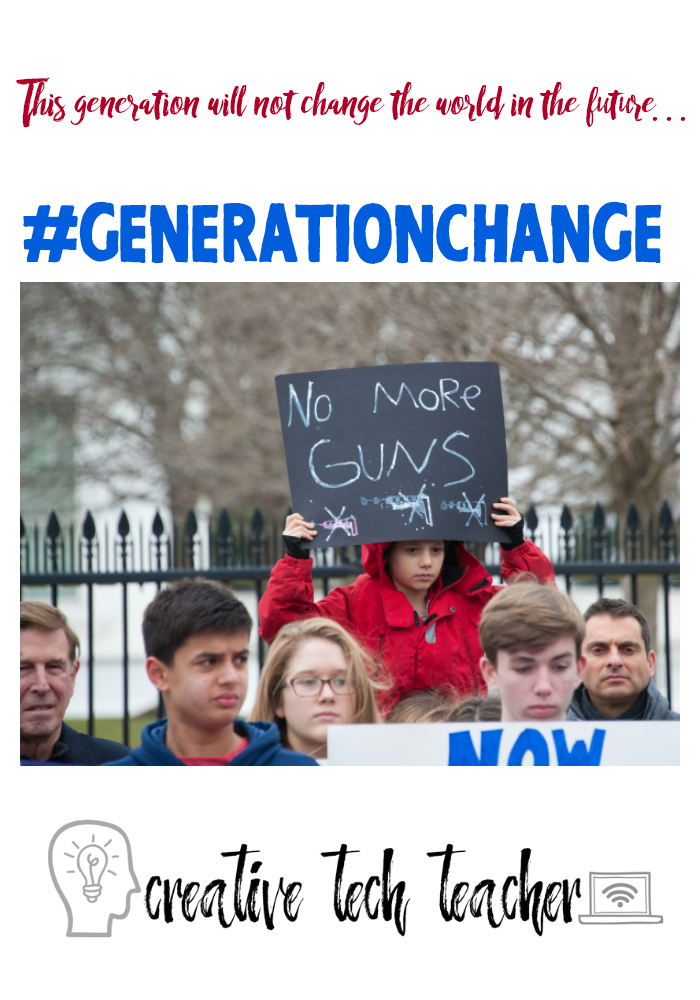 Follow us
Finding My Purpose as an Educator How Can Teachers Unplug from Work in a Constantly Connected World?

This website uses cookies to improve your experience while you navigate through the website. Out of these, the cookies that are categorized as necessary are stored on your browser as they are essential for the working of basic functionalities of the website. We also use third-party cookies that help us analyze and understand how you use this website. These cookies will be stored in your browser only with your consent. You also have the option to opt-out of these cookies. But opting out of some of these cookies may affect your browsing experience.
Necessary Always Enabled
Necessary cookies are absolutely essential for the website to function properly. This category only includes cookies that ensures basic functionalities and security features of the website. These cookies do not store any personal information.
Non-necessary
Any cookies that may not be particularly necessary for the website to function and is used specifically to collect user personal data via analytics, ads, other embedded contents are termed as non-necessary cookies. It is mandatory to procure user consent prior to running these cookies on your website.
SAVE & ACCEPT